We have already stated, our purpose is not to train scholars, but to make a brief synthesis of medicine, although in accordance with current knowledge, so that each one can or not form an opinion on the possibility of the chance like logical hypothesis, of the conception of human and the life on ground, in opposition to the existence of a creator.

We have seen the importance of the zona pellucida and peri-embryonic cells of the granulosa (corona radiata) in the "volatile" period of the ovum to ensure the survival and fertilization, and the need of blastocyst hatching before implantation. So we will now see how our Creator made preparations for the protective and nurturing system before developing the embryonic part of what is called the blastocyst at this stage of evolution.

We remind also that the days are those corresponding to the time after fertilization at which it normally takes 14 days to add the last menstrual period, knowing however that time of proliferation, also known as follicular, is variable duration depending on the person concerned.

When the blastula reached the stage of a hundred cells, it forms a cavity which swells until the pellucid zone breaks, causing blastocyst hatching about which we spoke in the preceding paragraph. Stripped of the zona pellucida, the blastula then takes the name of blastocyst.

In order that implantation process can be done, it is necessary that this corresponds to the blastocyst hatching time for the arrival of the ovum in the uterus zones allowing a proper location on the one hand, and the interval time corresponds with the secretory period of the uterus called implantation window as we shall see below. Without the simultaneity of these different circumstances, there could not be implantation. That's why opinions are still divided on the medical front, namely if the origin of the cells  (syncytiotrophoblastes) which will give rise to this implantation comes from trophoblast cells  which surround at this stage the blastocyste or from the endometrium of uterus.

Mouse over to enlarge

The hatching blastocyst, which is like an output of the egg, produces a direct contact of the cells of the blastocyst (embryo set) and those of the mucous membranes of the uterine endometrium newly renewed after last menstrual period (1). This implantation can occur only between 20th and 23rd day of the 28 days menstruation, (to correct if required according to the phase of proliferation at variable duration) the uterus having then entered a secretory phase called window of implantation. The outermost cells then establish with endometrial cells a system of interpenetration, a budding that produces a strong adhesion (2), whose origins are still controversial.

If the fertilized ovum has already undergone many transformations, it was hitherto fed by its own reserves, and was in no way connected to the body of the woman, of which it could have been evacuated without difficulty by a simple “sweeping”. In this stage which intervenes before even the normal beginning of the periods of the woman, this fertilized ovum, called at this stage blastocyste, and that it was separated from the woman's ovary to be able to be fertilized and receive a half different of chromosomes, not only will start to reimplant themselves in this same body, but to be nourished by this one. This does not delay anything in its evolution where we start to see appear amniotic fluid (1), under the yolk sac (2).

To be able to be established without the woman's immune system rejects it, the trophoblast cells (1) of the blastocyst that will form part of the placenta depends on the child, are surrounded by cells that will form part of the placenta depends on the mother. These cells behave in the image of tumor cells, thus limited lifespan, which may explain in part their potential for implantation in a hostile environment, but also their necessity to be evacuated after delivery. The placenta is an autonomous and transitional organ designed mainly to nourish and oxygenate the embryo and the fetus during intrauterine life. At its term, its total area to nutrient exchange is about 150 ft2, (16.7 yd2 or 14 square meters), for a blood circulatory about 25 to 31 miles (40 to 50 km).

This organ is made complex by the diversity of its metabolic and endocrine functions. For immunologists, the placenta forms the interface between maternal and fetal tissues and carries the immunological paradox that constitutes the survival of the fetus in an organism that is partly foreign for it. With full implantation of the blastocyst (embryonic set), mucous membranes of the endometrium close completely, leaving for some time a fibrin plug (1), as on a wound. Maternal blood vessels (2) are eroded; the hypoblast cells (primitive endoderm) grow (3) that will form a reserve of primary nutritive vitelline.

The hiding of the blastocyst in endometrial mucous membranes ends with a total environment of the future maternal placenta (syncytiotrophoblast cells 1), without any further cytotrophoblast cells (2) (part of the future dependent fetal placenta) comes into direct contact with the uterine mucosa. Inside the syncytiotrophoblast it is creating gaps (3) first fluid-filled cell and is then filled with maternal blood and in order to begin the first ramifications of the blood circulation system around the 13th day after fertilization.

When the implantation ends, begins to appear pre-gastrulation. The normal menstrual cycle of 28 days has not yet been achieved, since we fit here between the 24th and 26th days of this one. The cells of the epithelium re-covering the mucous membranes of the endometrium are completely closed. The primary vitellin sac (1) becomes distinct, and emerge a third sac, called extraembryonic reticulum (2) that will participate in the placenta and its annexes. The protective and nutrient environment being set up, the true embryonic development of the epiblast cells (3) which will become the neural plate starts to be distinguished. It is starting from this place which is then called Bilaminar Embryonic Disc (or didermic, didermique) embryologic disk (4), that will be formed the principal structures of the individual (head, body, limbs and organs). 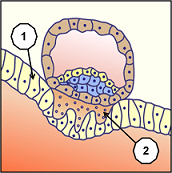 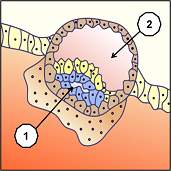 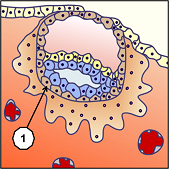 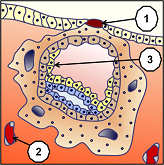 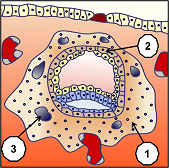 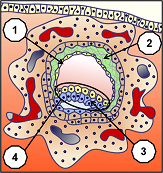 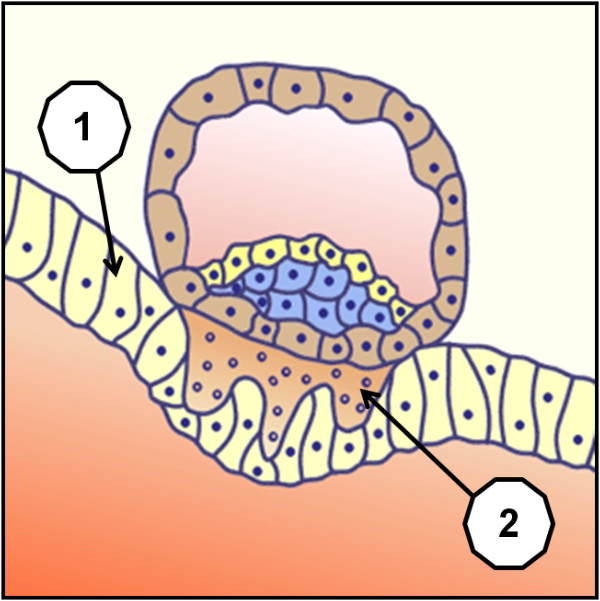 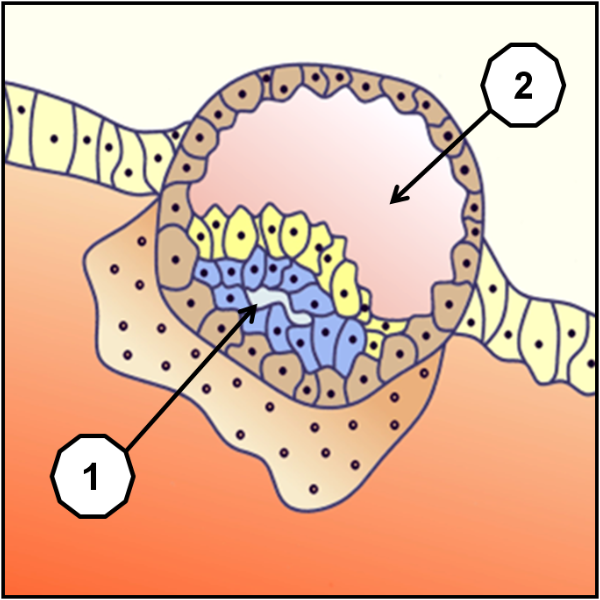 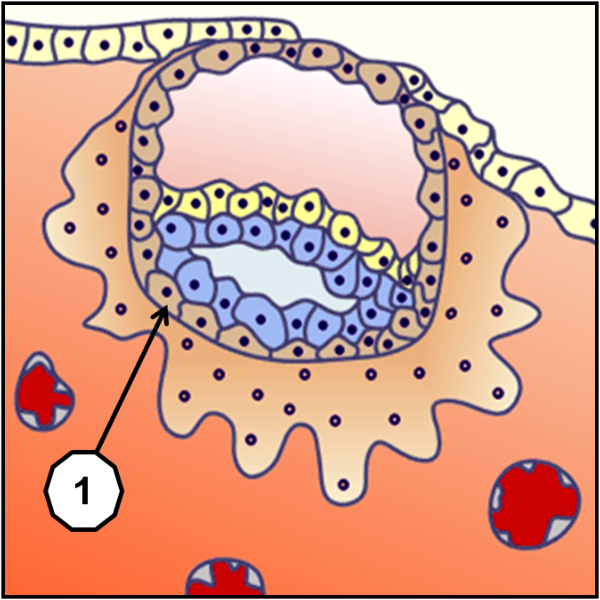 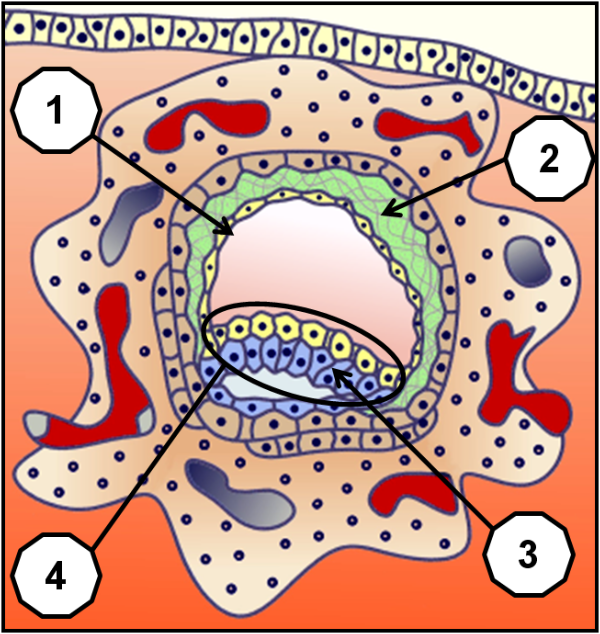