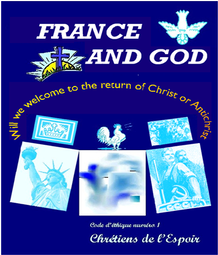 Symbolic of the book’s cover

In addition to the details described below, on the cover of the book is a large part of the themes covered in the writings.

This is why we find symbols of French culture and his "cock-a-doodle-Doo", located between the American culture of the Kings of the nations received English image and the Russians (ex USSR) where poor equality prevailed in opposition to the Tsarist absolutism.

A danger however Crown all nations that give reason to the Antichrist. The humanist balance French, acquired both carnally as spiritually over the centuries, is therefore be both the worst of the dangers and yet a reflection of balance desired by God. Let us make no mistake, this current balance us comes from carnal humanism and must pass through a real sanctification of our nation led by the Holy Spirit of God to make it holy. However, it remains that many other churches and nations already rooted in Jesus Christ must take as Director trend.

God will allow that the French no longer afraid of the image that many wanted to give them from God!

The Dove of Peace represents the Holy Spirit who is the only capable to bring the crown of laurels to any man who wishes to follow God through the Sacrifice of the Cross. The condition remains to follow it in the same way that Hebrews had to follow the Column of Smoke the day, and that of Fire the night, in order to call us into question from our carnal dimensions to which we so easily give reason rather than to the Holy Spirit of God. We act in good faith, that we are Christian or not, because we react more easily to the precepts born from our collective memories, than with those born from the Word and the Spirit of God in Jesus-Christ to whom we however say to belong…?

The sun of Peace and Truth cannot be obtained differently than to the Cross. The rivalries that are used by us to justify our dead works must all come to the Cross of Jesus if we want that the Kingdom of God advances on this earth. It is by condemning the other men and even our brothers that we close ourselves the Door of the Kingdom of heaven, because Jesus gained a victory at the Cross so that whoever believes in Him, does not perish but that it has the Eternal Life.

France, located between the fundamental values of the United States and the ex USSR, represents humanly a social balance. This has been create over the centuries by men who sometimes sought God's will, but sometimes were anti-God, as I was, often because of the poor image they received from their sovereigns. Although bloody, the French revolutions were not predominantly shot against God that royal power represented at these different times. Let us hope this so-called “balance” that deposed the human monarchy, is not with the humanistic image of tepid that God will vomit. Let us hope again that we would turn sufficiently to Him, so that the blessing that rests until the thousandths generation on the descendants of those who followed God, can be to us granted.

The United States, born mostly from English or Irish traditions and customs, progressed to the torch and grandeur that represent the English lords, for the common man. Their needs for regrouping to ensure a balance of survival in front of the powerful European states of the time brought them, often with the assistance of God, to becoming the first economic world power. In this euphoria of “youth” to which all seems to succeed for always, one unfortunately finds there the human presumptions to which it is so easy to give reason, even if God requests humility at his children. Which is the person who calls herself into question in the easiness?  God then grants a time before asking for, that the tree bears good fruits. We hope nobody with the slightest bit of common sense; will come in judgment against the United States because of their carnal collective memory!

More the self-proclaimed monarchies of divine birth remained primary and tyrannical, more they created violent and sanguinary revolutions against God, considered then as the plague of humanity. The autocratic tsarism preceding the communist period of the former USSR is the perfect bad example of what humans can do of most mediocre without God. The utopia in which the balance of work and income was the basis of human happiness and in which any form of government will not have even utility, so much the man would live happy and fulfilled, demonstrated how heresy one who wants to build his happiness without God is great.

The cock, as a French emblematic animal, goes back to the fall of the Roman Empire and have one's origin in the word “Gallus”, which meant as well “cock” as “Gaul”. It represents well our stupid character of revolutionist who, by his cock-a-doodle-doo, would like that each one stood up as of his alarm clock. On the pretext of 1789, we often boast, taking to us for the examples to follow, whereas our humanistic balance with the too narrow revolutionary spirit to know to negotiate, can lead us to the greatest disaster of our history, that to beat us against God to the profit of the Antichrist: Satan. The image of the will of God by which we prove our right, is that of the Good Samaritan or the Poor Lazarus, let us hope thus that we know to live these examples with the assistance of Christ and not with our own glory.

Like the kings among the nations, the United States unfortunately too often give reason to their excess of abundance. They become then on the earth, towards the other nations, the image of Louis XVI who preferred rather to hatch a coalition against his own people than to abandon certain feudal privileges. This one was all the more reprehensible as it had the English example that he fought, just like today the United States prefer to preserve a first place to the detriment of some of their the own compatriots, although they have the French social example. On account of an example certainly rather bad, they prefer to do worse, as if God led them to this selfishness. The image of God that they use to justify their error is that God gives the first rank to those whom follow Him.

To want to banish God of any human spirit, author according to Karl Marx of any human misery, they put all in place of small gods, in the human narrow-mindedness. Les hommes conduits par leurs plus bas instincts, sont devenus leurs idoles auxquels ils ont élevé des statuts tel celle de Lenin sur la Place Rouge. They bowed down before, without knowing that these men do not have a better spirit of integrity than they do. Because they lowered God on a lower level than that of the man, they wanted the equality for all, but each one with sought to benefit from the other, because the carnal man does not do the good he would like to make, but does the evil that he would not like to make.

A danger crowns all the nations, and France in particular, the one to give reason to the Antichrist who comes on the world.

Our social “balance”, is a quite poor example of what God wants to establish for the management of our earth when His children in Jesus-Christ will make up the entire population of the earth. If it has the advantage of showing that our type of society is viable, so that each one is able to say that there are no poor in the country of God, it presents the enormous risk to see us turning us towards the Antichrist at the time preceding the Return of Christ, now Reigning, rather than towards Our Liberator. We must thus to shout to God like Hebrews made it in desert, because if we are those that have less change of society to carry out to live in balance than God wants to found on this ground, we are those who are likely more to give reason to a humanistic peace, therefore demonic.