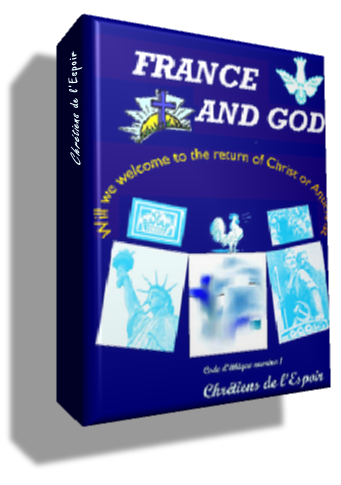 Your previous page Symbolic of cover Summary of the cover

Remarks of the author

This work is meant for any person eager to understand why so many divisions reign in the name of God, and even in a Christian world that often tears.

The fault must not to be attributed to God, but to the man who builds themselves with carnal a priori that he does not control.

Chapter 1: Was I worse than others?

Chapter 3: Were they worse than others?

Continuation of chapter 3: Were they worse than others?

Continuation of chapter 4 : The revolutions

The couple, the groups and nations

The limits of our antique logic

Chapter 6 - The fruits of Peace

The fire of the third baptism

The interest of the good fight

Chapter 7: The sanctification of God's people

Continuation of chapter 7: The sanctification of God's people

Chapter 8: The way of the nations

The first civic duty of the Christian

Where is placed France?

Letter from a woman prenamed France, to her friend Isaac

Letter from a woman prenamed France, to her friend Ishmael

Chapter 9: The Hope (+ summary and bibliography)

Warning: This site has the aim of accompanying the contained information in our codes skinny “France and God” and “the Boomerang Effect”, which have the role the demonstration of a positive renewal of the carnal psychology of our animal nature by an exchange of the cognitive cards born in the nature of the Holy Spirit of God in Jesus-Christ. Its contents do not seek to replace the opinion of a doctor or a psychologist for a diagnosis of medical pathologies, not more than with the ministry of any church. He addresses himself however to those that believe our world sick of its animal nature, eager to work them at their personal renewing, in a Liberator Spirit and of joy.

Letter from the president

The writings contained in this ethic's code 1 are offered as a favour carried out by Alain MESLAGE, cofounder of non-profit-making association CHRETIENS DE L'ESPOIR, created on April 28, 2002, published in the Official News from the French Republic on June 15, 2002, with for object:  To work to the regrouping of the Christian forces by the valorisation of the life led by the God's Holy Spirit in Christ Jesus, in any Christian confession or political circle or not that it is.

These writings informative are given without charge at new members, for one of his first two years from affiliation, and cannot thus be the subject of sale or remunerated transfer. It's supplemented by a code of ethics II named:  The Boomerang Return, written in the same way by Alain MESLAGE, and also given for one of his first two years of affiliation, with the choice of the member.

These two codes constituting the directing axis of our association, were adopted by our general assembly of October 25, 2005, as "Ethic's code I and II" mentioned with article IH 8 of our rules of procedure. They will thus be used as reference as well as our rules of procedure itself, in the event of litigations on behaviours or public remarks of its members made in the name of association, opposed to their contents. They are both consultable freely with the seat of our association, like on Internet.

After this some information, we are thus happy to welcome you among us, to try together to make to the will of God our Father in Christ Jesus.

Can by this adhesion the Lord bless you beyond your hopes!