Nothing of what one gives to God of a sincere heart, returns in our lives without bearing good fruits. 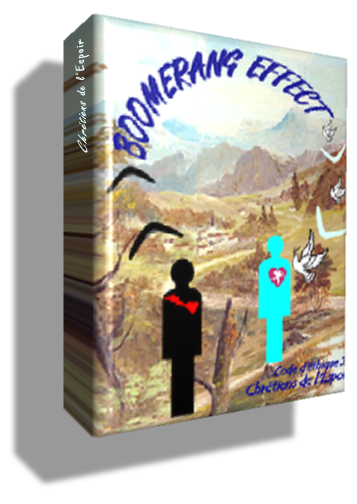 Remarks of the author:

This work more particularly concerns the Born Again Christians, because it leads towards work to achieve in communion with the Holy Spirit, in order to live the happiness of their first Love daily.

Chapter 1 - What is this weapon?

Letter from the president

The writings contained in this ethic's code 1 are offered as a favour carried out by Alain MESLAGE, cofounder of non-profit-making association CHRETIENS DE L'ESPOIR, created on April 28, 2002, published in the Official News from the French Republic on June 15, 2002, with for object:  To work to the regrouping of the Christian forces by the valorization of the life led by the God's Holy Spirit in Christ Jesus, in any Christian confession or political circle or not that it is.

These writings informative are given without charge at new members, for one of his first two years from affiliation, and cannot thus be the subject of sale or remunerated transfer. It's supplemented by a code of ethics II named:  The Boomerang Return, written in the same way by Alain MESLAGE, and also given for one of his first two years of affiliation, with the choice of the member.

These two codes constituting the directing axis of our association, were adopted by our general assembly of October 25, 2005, as "Ethic's code I and II" mentioned with article IH 8 of our rules of procedure. They will thus be used as reference as well as our rules of procedure itself, in the event of litigations on behaviours or public remarks of its members made in the name of association, opposed to their contents. They are both consultable freely with the seat of our association, like on Internet.

After this some information, we are thus happy to welcome you among us, to try together to make to the will of God our Father in Christ Jesus.

Can by this adhesion the Lord bless you beyond your hopes!

First part - From where did I come?

Chapter 3 - The Entry into the Temple

Chapter 4 - The rout of my faith

Continuation chapter 5 - Was I adult?

Chapter 6 - Marie-Claude, my beginning of paradise!

Chapter 7 - I was floating on my small cloud

Second part - Where I go!

Chapter 8 - The guide of the Holy Spirit on our way

Chapter 10 - The state of mind

Continuation chapter 10 - The state of mind

Chapter 14 - Traps of the Christian

Chapter 15 - Those, that is better not to be

Continuation chapter 14 - Traps of the Christian

The texts written in blue are the passages lived in relation to the corresponding spiritual writings.

In the second part, you will be able thus to go back to the lived testimonies, in order to make more concretely the relationship of cause and effect of it.

Warning: This site has the aim of accompanying the contained information in our codes skinny “France and God” and “the Boomerang Effect”, which have the role the demonstration of a positive renewal of the carnal psychology of our animal nature by an exchange of the cognitive cards born in the nature of the Holy Spirit of God in Jesus-Christ. Its contents do not seek to replace the opinion of a doctor or a psychologist for a diagnosis of medical pathologies, not more than with the ministry of any church. He addresses himself however to those that believe our world sick of its animal nature, eager to work them at their personal renewing, in a Liberator Spirit and of joy.