8 - True beginning of embryonic development, gastrulation before the neurulation

The embryonic cells were certainly already well demarcated in the blastula before implantation, and even if amniotic fluid appeared around the 7th day, the embryonic part has only little changed since then in relation with the development of the protective and feeder system. We must not forget that until the implantation, the cells appeared by dividing the zygote cell (fertilized ovum), and not by multiplication as is the case when the feeder maternal system is established. During the period in which the cell was as "volatile in the corridor of the fallopian tubes," it was divided into retaining only a small fraction of stem cells capable of generating the future fetus, but has surrounded them with acceptable protective cells by the mucous maternal endometrium to prepare it to leave the protective zona pellucida (skin). This phenomenon which resembles an exit of egg of its shell during the hatching blastocyst is already exceeded by at least five days towards the end of implantation. The cellular set, called at the stage of implantation, blastocyst, has used all his energy to establish it in the endometrial mucous, without which no feeder system could be installed.

All this part of the progression clearly highlights the necessity having to protect the embryo from maternal immune system composed of cells which twenty three chromosomes are different from those of the embryo. That is why, according to "writing" established in the genes, nothing is left to chance and any observed anomaly can be fatal to this embryonic set, either the mother or both. Thus, when the blastocyst hatching occurs in a time which does not correspond to the time necessary with the ovule fertilized to traverse the Fallopian tubes, or any other form of incident prevents it from advancing, it can happen that this one forms a kind of implantation in the Fallopian tubes, to see even in the pavilion. One speaks then about ectopic pregnancy (or extra-uterine pregnancies), very dangerous for the mom.

Before the end of the second week after fertilization, we have already noticed the location where was going to develop the future embryo called then Bilaminar Embryonic Disc. Until the end of the second week of extra-embryonic transformations of order will still take place without the embryonic structure actually changes. The cells in blue, called epiblast cells, (3) on our representation, will then become the engine of a great upheaval called Gastrulation. In humans this gastrulation is migratory type, as in most mammals.

Some see the gastrulation, as the most important moment of the life, since it is starting from this gastrulation organized by the only epiblast cells that will be generated the “symmetry” of the body, as well as the majority of the organs starting with the intestines. This also explains why this symmetry is still relatively imperfect as it is related to the rate of evolution of cells, one compared with the other. The central cerebral system from which this symmetry develops certainly will evolve at the same time as this cellular propagation, but as refined this system can it be, as it will always keeps a level of tolerances. From this gastrulation, will also specialize the cells that give rise to the digestive system, nervous system and other organs, making it indeed a crucial moment, even though each period is important.

Our purpose being however only about documentation for a better spiritual reflection and not a teaching, we will only see rather briefly in this booklet, the part of the gastrulation related to the embryonic development. For the people interested in deeper scientific subject, we give you below the links specialized sites.

Cross-section of the embryonic part

In the early days of the third week after fertilization, the bilaminar embryonic disc, which had changed very little during the implantation, begins a transformation and becomes trilaminar embryonic disc, what marks the real beginning of embryonic development and that is called gastrulation. This third sheet will not appear spontaneously but formed from pluripotent epiblast cells that possess any "knowledge" to generate the embryo and the fetus, but lost the ability to generate the placenta. By multiplying these cells will generate highly organized migration currents, which is structured according to the natural symmetry axes of the brain and the whole individual, while generating some more specialized cells already attached to organs such as endoderm, which will become the intestines.

Cell migration during gastrulation, which begins around the 15th day 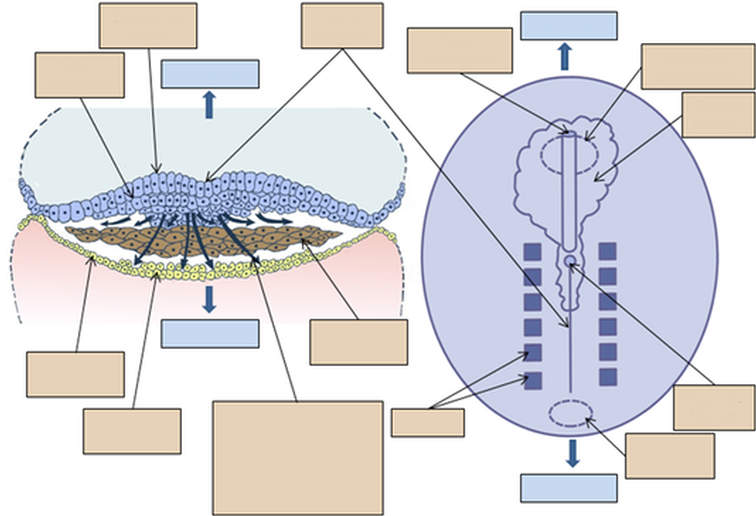 Thirteen to fifteen days after fertilization, a primitive streak begins to appear and mark the definitive symmetry axis from which the total of the individual will be built. At the 19th day after fertilization, which is the 33rd day of a normal cycle of 28 days, if the variable proliferation phase is really of 14 days, the neural plate, which becomes the neural tube  by invagination, are well marked, and determine both what will become the main parts of the brain, spinal cord and vertebral column.

These epiblast cells that behave like tiny brains interdependent of each other, allow us to see how the brain they already up, going to have a body and, simultaneously to this increase, to develop the organs necessary to its survival.

What we must especially note at this point is already very visible extension of the neural plate in the somites, future vertebrae of what will become the spinal cord, of course, but also the Little Brain of the Heart, with everything it includes as a spiritual influence. We see already indeed on the following page, how the part of the heart of the embryo is visible with its need for management consistency by this organ that we have some description in Chapter 2 of Science and faith.

The symmetry of the body will thus be supervised at best depending on the speed of development of each of the cells, but without ever losing sight however, that the individual will be in the end, what genetic Scripture contained in the zygote cell will have determined. We thus find very quickly the two cerebral hemispheres with their characteristic shape in arc of a circle which gives to the embryo then with the fetus this same form.

Movement of cells resulting from embryonic cells, towards a specialization of these ones for various functions.