1-2 The structure of our three brains.

The cerebral and mental structure at our disposal to manage our vital functions and any kind of emotion is so deep, that if we are to understand ourselves, we must go back to our personal origins, that is to say the fertilization of the ovum which gives rise to a new human being.

Why new? Because each one knows that through a birth, there is division of the genetic data of the father and the mother, so that we became a new individual, with a new approach of the lived context. So we get 23 chromosomes from our mother, one of which is necessarily of a sexual nature X, and 23 from our father. According to the sexual nature of X or Y sperm from the man who fertilize the ovum, we obtain the determinant female sexual XX, XY or male.

After ovulation and fertilization by a sperm cell with 46 chromosomes is now called a zygote and contains all the ability to generate any cell in the body whatsoever. The brain and other organs is potentially already in it, which proves well that the body actually represents only little thing in connection with our spirit.

The division (Cleavage) of this new cell at intervals of 12 to 16 hours, will see a succession of stages, morula, blastula, before implanting in the woman's uterus (implantation) to the 6 or 7th day 8th to the maximum after fertilization, about the 21st day of the cycle. The second week of fertilization is one period pre gastrulation, ich led around the 15th day to the gastrulation which is one of the most important phases of our life. It is through the gastrulation which begins the symmetry of the body and the beginning of neurulation. This neurulation begins with the formation of the neural plate to the 19th day after fertilization, i.e. for a normal cycle at the 33rd day after the previous rules, and only five days after the normal rules. This implies therefore, that many women consider at this time when only a slight delay of rules more or less normal. It is from the neural plate, which becomes the neural tube, that develops nevertheless the brain and spinal cord, which are then more developed organs of the embryo and gives it its characteristic curved shape. By the third week, the nervous system will start to set up itself, for very quickly leading to the major part of the cerebral structures and the spinal-cord. The eyes will appear then, then the ears and finally body entire with a great majority of its organs which will be set up at the end of the eighth week. The remainder of the pregnancy will only serve to the growth of all these organs and the establishment of the last few, which includes sexuality.

From the neural plate, our brain will thus be structured according to a construction comparable to three different brains if we omit the “Small brain of the heart” which we will look at further. These three parties have indeed an infinite amount of interconnections, but each forms a specific concept of organs which they have added many small appendages that we will not name on this site. We will remain in effect on the main structures, which, although limited, may seem very boring to some.

The first part is called reptilian brain, or diencephalon because of its structure very resembling the brain of a reptile. It manages all the vegetative functions. The second level is called brains limbic or brain from paleo-mammal for its appearance in the first mammals. It receives mostly olfactory messages, but also the primary dimensions of affectivity or emotion that correspond to what the Bible calls the human mind. Then comes the most elaborate part, the neocortex or neo-mammal brain, as also existing on the most advanced mammals. The neocortex, brain of the synthesis, receive indeed in are right hemisphere a share of affectivity related to our conscious and the corresponding cognitive maps. (See details on website of Dr. René FLURIN). The foundations of this system are found to be the engine of our embryonic growth around which gradually builds the fetus (Visit the excellent site The Brain at all levels) 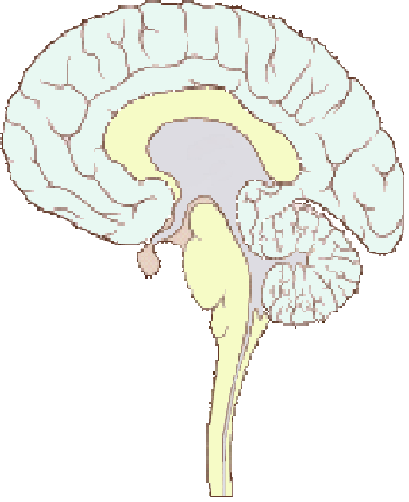 The three principal parts of the brain

It is the regulator of the vegetative life

One calls the second Limbic brain or from the Paleo-mammal.

It intervenes especially in the olfactory messages, affectivity and the emotion, but also the learning.

Seat of the language, logic and the abstraction

- The right hemisphere, is especially the seat of the intuition, affectivity,

- The frontal lobe is the seat of the most elaborate functions: thought, synthesis, creativity.